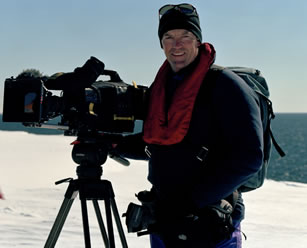 Peter Young is an award-winning documentary cameraman and producer. He came to filmmaking the long way, spending the first ten years of his working life on the land and sea over which time he developed a strong connection to the great outdoors and people who live and work there.

Peter established Fisheye Films in Christchurch, New Zealand in 1997 and has worked as a freelance director and cameraman ever since. He has credits in well over a hundred documentaries, among them; BBC’s Blue Planet Series, a Giant Squid documentary for prime time Discovery, he filmed many of the South Island Country Calendar episodes, the acclaimed TVNZ series Explorers and the final tribute documentary for Sir Edmund Hilary. He produced and shot the award winning series Hunger for the Wild for TVNZ and is now working on his second series of Coasters.

He has recently completed his first feature documentary The Last Ocean, a project he began in 2006. This labour of love has expanded into the formation of a Charitable Trust to promote the protection of the Ross Sea, Antarctica, the world’s most pristine marine ecosystem.

Peter has won many awards for his skills and creativity behind the camera, both shooting and producing, but it’s the opportunity to work with great teams and telling great stories that keeps him in the business.